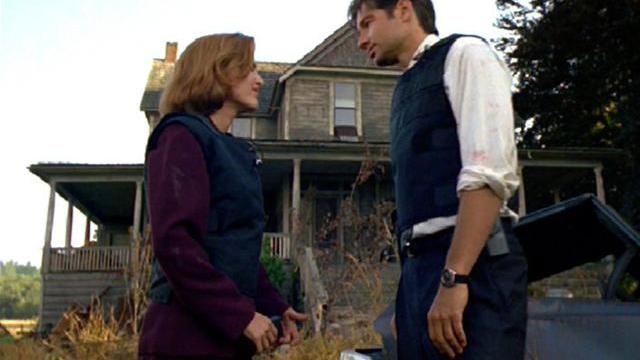 Scully and Mulder in “Home”

In October of 1996, an episode of The X-Files called “Home” aired for the first time. Despite this seemingly innocuous title, the episode caused a massive controversy and was banned from airing on Fox again for three years. Today, almost twenty years after the original airdate, “Home” continues to top lists of scariest or most disturbing TV episodes.

The plot of the episode centers on a trio of brothers named the Peacocks who are under investigation by everyone’s favorite FBI agents, Fox Mulder and Dana Scully. The two are investigating the grisly murder of a baby born with a multitude of congenital birth defects. Mulder and Scully suspect that the baby was murdered by the family because the birth defects would have prevented it from surviving and thriving. Thinking that the brothers are the only surviving members of the Peacock family, the agents believe that the brothers have kidnapped a woman and are forcing her to give birth to their children to continue the family line. The truth they discover is far more horrifying: the brothers’ paraplegic mother, thought to have been killed in a car crash many years earlier, is in fact alive and has been producing offspring with one of her sons. At the end of the episode, the brother and mother escape Mulder and Scully and run off ostensibly to begin a new inbred family. The reason the Peacocks have been inbreeding is never explicitly stated in the episode, though the agents  speculate that it has been happening in the family for quite some time.

Strangely, this most disturbing episode of The X-Files has  ties to the freak show tradition. Glen Morgan, one of the two writers for the episode, recounts an experience he had in college reading Charlie Chaplin’s autobiography:

Before he [Chaplin] was famous he was traveling in musical theater, and he rented a room in a tenement with a family that took a liking to him. They said, “Hey, we got something to show you.” And they take him up to a room with a cot, and under the cot was a man on a platform, and he was wheeled out and they stood him up and they clapped and danced and the guy did tricks. It just seemed like such a horrifying situation, and I’d been trying to use it. So we had been working out the story where there was another brother under the bed, and Jim Wong one day goes: ‘It’s the mother! The mother’s under the bed!” (Wong)

The story Chaplin recounts in his autobiography deals mostly with his horror at a scenario in which a man with no legs is brought out by his family and made to perform tricks. The family hopes to send him to the circus, to make him perform as a freak, presumably to supplement their income. Chaplin walks away deeply disturbed by the whole incident.

Viewers of “Home” also come away from the experience disturbed, though not for the same reasons as Chaplin. While Chaplin was apparently disturbed by the treatment of the limbless man, the viewers are horrified by the actions of the Peacock family. Glen Morgan has taken the freak show narrative Chaplin told and turned it from a pitiable story to a horror story. In some ways, this means that “Home” furthers the freak show narrative of othering those who are different. By turning Chaplin’s pity-inducing story into a terror-inducing story, emphasizing the Peacock family’s brutal and inhuman tendencies, and turning them into incestuous murderers, the freak show tradition of creating fear and discomfort toward the people exhibited (here represented by the Peacocks)  is continued and, in fact, expanded upon. It parallels the “us vs. them” mentality of the freak show, making the Peacock’s disabilities into objects of terror for the “normal” viewers.

Yet, the Peacocks are not truly a clearly defined other. In a show that regularly deals with the supernatural, featuring episodes covering everything from pyrokinesis to aliens, this episode is particularly disturbing to viewers because it is focuses on an apparently entirely human family. The Peacocks do not have any explanation for their behavior. They are not aliens; they have not been enticed by the government somehow; they are merely human beings who act in an inhuman manner. As Doryjane Birrer states we are “disturbed to find how increasingly blurred are the boundaries between us and them, human and monster” (218). Where the freak show created a comfortable and obvious other against which the audience could position itself, this episode unsettles that trope. Here, the Other is not quite as other as we might like to believe.

Living in a world after the freak show does not mean that we are free from the long-reaching cultural shadows it throws. The binary opposition of the human vs. the Other is still very much present in our understanding of the world. We fit ourselves comfortably into the side of human and imagine anything not fitting limited criteria of humanness is clearly and distinctly Not Human and therefore monstrous. The Peacocks crash through the boundary of human and Other, destroying the binary opposition we find so comforting. When the freak in the freak show is presented to the audience, his or her differences are the focus of the presentation. The fact that the Peacocks are human is emphasized in this episode, forcing the audience  to confront one of the scariest truths of all: sometimes, human beings are the monsters.

The episode “How the Ghosts Stole Christmas” (1998) of The X-Files is one that stands out from other episodes in that it is both a Christmas special and one in which the two agents actually encounter the monster of the week without any question as to whether or not it is truly supernatural. One particularly important theme is that both characters are forced to face their hypocrisy. The characters and their relationships are developed significantly.